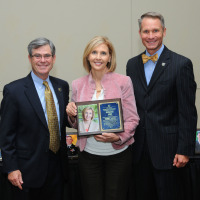 Virsys12 President and Founder Tammy Hawes was presented with an Excellence in Business Award and inducted into the East Tennessee State University Hall of Fame for the College of Business and Technology at a ceremony there on October 30. The personal award comes at a time when Virsys12 is nominated for its second NEXT Award in Technology, this year in the Growth category, and Hawes will be a presenter at the November 20th awards where she is the sole female nominated for the NEXT Awards’ Entrepreneur of the Year. Additionally, Hawes is set to speak on the “Demystifying the Cloud” panel for the Nashville Business Journal on November 18th to be held at the Omni Hotel in Nashville.

“Technology is my passion, and making it accessible and effective for our clients to accelerate their success fuels my energy,” comments Hawes. “I credit my team and incredible clients for making my dream of Virsys12 a reality.”

Tammy Hawes was one of the first female computer science majors to graduate from ETSU. She has also been credited with the first Nashville, female-led technology acquisition this year with Virsys12’s purchase of Velox Consulting, LLC. Virsys12 recently announced their move into app development along with their Salesforce-focused consulting services, and the firm will close 2014 with another triple digit growth year according to Hawes.

“We are honored to have Tammy join the Hall of Fame,” comments Dr. Dennis Depew, Dean of The College of Business and Technology at East Tennessee State University. “The College of Business and Technology has over 22,000 alumni and Tammy Hawes was identified as one of our very best by her peers. She exemplifies the leadership, technology talent and determination necessary to succeed in the high-tech industry.”

In late 2013, Virsys 12 was awarded the NEXT Award as Technology Startup of the Year presented by the Nashville Area Chamber of Commerce and the Nashville Entrepreneur Center, in recognition of the company’s growth. Virsys12 was one of the two youngest companies (less than three years in business) to be a finalist in 2014 for the Nashville Business Journal’s “Best in Business Award,” while Hawes was also a finalist for a 2014 “Woman of Influence.”